Probably the best and also most frustrating day so far - the day started on some tarmac, driving towards a storm front which required us to stop and put the roof up just as the storm broke; in a break in the clouds we had a brilliant sprint hillclimb (interrupted by a herd of sheep and goats for some!), and then the weather returned and the storm gave the extremely challenging and rocky ascent to 2800 metres a whole new complexion! Several cars had to be towed up or had to ask their excess baggage (navigators!) to walk, but Gidget stormed to the top successfully (see photo below from Gerard Brown who was camped out at the top in the freezing cold!). Somewhere on the ascent, we lost a headlight through all the rattling. The descent the other side was in sleet and snow, but as we cleared the lower slopes, through a rather damp village, and out onto the corrugated lane (which didn't have a good speed and was VERY uncomfortable!), the weather cleared and the sun came out. And once we had cleared the corrugations and somewhat challenging approaches to the dry lake bed, we charged across the completely flat lake bed with delight, and after a short but evidently challenging climb over the dunes, we sighted Achit lake and the campsite on its northern edge. What we couldn't see was the clouds of flies which appeared to have hatched just for us! And which covered everything, and got everywhere. I mean everywhere! Even lighting a fire later in the evening only provided temporary respite, so it was an early night to get the right side of the flyscreen of my tent. 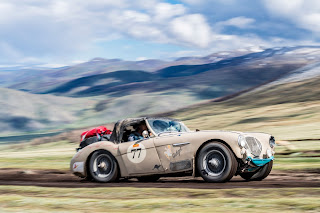 Link to the day's video courtesy of Garry here and here
Posted by Ashton at 03:07