0060 Getting ready for Alice

Ashton has already detailed all the good work Garth has been doing down in Sydney, so now all we have to do is get Gidget safely to Alice, and make sure we do our bit of keeping her on the straight and narrow during the COT Rally in and around Alice !  Gidget's ready, but are we ? 😉   Time will tell !
Stay tuned and we will try to get some of the action posted on here as it happens.   Meantime,  I have been dealing with a seemingly never ending stream of things which just seem to appear out of nowhere ! Storage, tools, cup holders, first aid requirements, paperwork, hotel reservations, accomodation in Paris, dinner suits for Paris - Where does all this stuff come from ?

But for now, we are forgetting Peking to Paris, and concentrating on COT in Alice Springs.  As has been said before, storage space in the Healey is minimal, so we have to creat something from nothing. We have already made a new dashboard to locate the many rally aids, but where can we put our papers, our note pads, our cameras, our water bottles, and everything else that will be required during our 36 days trip halfway around the globe ?   During our drive in Sydney a couple of weeks ago, we worked out a few places. One was an armrest or drinks holder over the short transmission tunnel just behind our seats - It isn't big, but it is usable.  So I set to work to
make a unit that would fit securely over the transmission tunnel - A bit difficult when you don't have a transmission tunnel to take measurements from ! I first of all made it as a drinks holder, but once I found somewhere better for cups, I changed it to a storage unit with a lifting lid which doubles as an armrest.  I haven't finished it off or covered it until I can get back to Gidget and see whether it fits or not.   I can see my evenings camping on the way to Alice will be busy ! 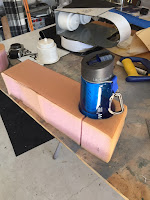 The alternative cup holder I refer to is very simple - It is in the doors.  Initially I had decided that doors that open and shut all the time aren't the ideal spot for a drink, but if the bottle is sealed, I decided it might be OK.   Additionally, low down inside the doors are some very sharp screw points - The inside of the screws holding the door trim in place, and a nasty
potential injury point.  So I got some large blocks of foam that came out of the old cushions in my 4WD camper, and cut a piece off that I thought would fit in the door - Once again, no door to measure it against !   I then cut a circular hole in the foam to hold a drink bottle firmly, even when a door is opened and shut a lot.  For anyone working with foam, cutting it becomes SO easy if you use an electric carving knife with twin reciprocating blades - Like a hot knife through butter.  And even cutting circular holes for drink bottles is relatively easy.  So made these two foam section / drink holders.

Meanwhile some canvas bags I had ordered on-line arrived. Our initial spare part and tool storage idea was to use small plastic boxes and strap them down securely in the boot. Having done this, the short dirt road run in the Hunter Valley demonstrated that this idea had shortcomings - The boxes soon started to move around over the bumps.  The boxes them selves are still good, but we need a better way to secore them.  So we are trying small canvas bags into which we can either put items loose, or we can put the boxes in, and then strap these down so that several boxes are held in place within the bag.  I have purchased 5 different coloured (for ease of identification) small bags, as well as two larger bags into which we can either put the smaller bags or some of the boxes.  Once again, I need to try them in Gidget to see if they are going to work !

I had also built an additional storage box for the passenger side of the transmission tunnel, which I
detailed in my last entry.  In the Healey, the foot well on the left hand side is much wider than that in the right hand side, something that Ashton was finding difficult as there is no space on the right hand side where one can rest your clutch foot when driving.  Thus this box will only fit on the passenger side.  Then last weekend there was a Lotus Club sprint event up at Lakeside Motor Racing Circuit, and I was told by friend Daryl that one of the entries was a 1953 Austin Healey 100/4 - Almost identical to Gidget.  This I had to see - plus, if I took all my boxes up, maybe I could check that they would fit !  So on Sunday morning I loaded all my boxes and foam blocks into the car and took them 2 hours north to Lakeside.

And sure enough, there was - er ........Gidget !   It was almost a deja vu of a year ago, as the Healey was the same green as Gidget had been originally, although the panels look somewhat straighter !  Tom Overland was the owner, and we were soon chatting about all things Healey !  Eventually I tried my foam inserts in his doors - And found that he too has sharp trim screws protruding inside !   My prototypes fitted quite well, and Tom even liked the idea !  Testing the fit of the transmission tunnel box was harder as Toom has quite a lot of extra trim inside that Gidget no longer has, and I couldn't really expect Tom to take his car apart for me, so that will have to wait until I get back to Gidget.  What was of interest was that Tom had fitted some seats that were much more comfortable than ours, and we may have to look into after Alice.  He has also fitted BMW anti-burst door blocks on his car, which prevent the doors flying open at inopportune moments (like when going round roundabouts !), a fairly common Healey quirk !   We will get together once I get back from Alice as Tom has plenty of good ideas of things we can do to improve Gidget.  And nice to see a Healey turning a wheel in "anger" on the track.

Ironically I then had a call from Steve at CCC and he had some seats there that we might be interested in.  They are from an MGF Trophy, and need a bit of trim repair, but look very promising size wise.  As there was also an MGF Trophy in the workshop, I was able to sit in the same seats in the car, and they are very comfortable.  Whether we can make them fit or not we will have to discover after Alice.

I keep referring to"Alice", when the event is actually "Lasseters Classic Outback Trial" (https://classicoutbacktrial.com.au/), while we are actually in the ERCA (Endurance Rally Club of Australia) Regularity section, (https://classicoutbacktrial.com.au/about-cot18/erca-regularity/).  The ERCA event in Alice Springs is just a small part of a 26 day tour around Eastern Australia, starting in Melbourne on July 8th, travelling via Alice, Mt Isa, Longreach, Winton, and eventually ending in Sydney on September 4th.  However due to time constraints we are just competing in the 7 day rally that is to be held around Alice Springs, returning each night to Lasseters Casino Hotel so we get hot showers and food as well as a comfortable bed each night !  But as it is largely off road, this is a major shake down prior to the P2P, and several overseas entries are taking part as their shakedown for next year's P2P.

With Gidget currently in Sydney, I will drive down on the 9th / 10th in my 4 WD, load up Gidget on a trailer in Sydney and head west to Alice Springs. I am allowing 5-6 days as it is 3700 kms from the Gold Coast, I need to ensure I get there in time.  I will be camping in my van all the way - And presumably working on Gidget in the evenings ! Scrutineering etc starts on 16th August.

Another item I have made up is a shroud to cover the radiator grill.  We are still having trouble getting water and oil temps up to optimum during the cooler weather, and after some tests run by Ashton just using cardboard, we have seen temps increase.  So I have made up a vinyl cover that we can clip to the radiator grill, and we can then lower it as temps increase.   If it works we will make one slightly larger than will hopefully also double up as a water protector for when we have to cross rivers !


I am actually towing an empty trailer down to Sydney for a Lotus friend who has just moved to Sydney, so I have taken the opportunity to tie some of the heavier original Healey parts onto this trailer as a means of transporting them to Ashton in Sydney - The old crankshaft, old spring leaves, a jack, camshaft, stator tube, and a number of other parts.  The car is also full, so where I am going to sleep in the 4 WD tomorrow night remains to be seen !


Lastly, before I set off tomorrow, Craig Devine from Devine
Digital Sticker Co has just brought over some of the stickers we need for the car - decals from Beyond Blue and Cancer Council (for whom we are raising money during our trip), our "driver" and "navigator" decals, as well as the names of all the countries we will be visiting next year, which we will be using as a "map" on the side of our car.  And Andrew Bluhm, our resident body work man, dropped in with some reinforcing plates for our rear bump stops which we will fit before the rally.

So.......I think we are ready. Stay tuned as we travel halfway across Australia and take part in our first Rally in Gidget.

Rest of the pics are here :-  https://photos.app.goo.gl/jZVzY7ksTupSzwaG7