Since Giles has dropped Gidget off with me in Sydney, I have to pick up the running on the blog :)

Following our initial run with the ERCA folks to Wollombi a couple of weeks ago, Gidget went to Garth at Repairs and Restorations, for a bit of fettling as follows; Garth's last involvement in Gidget's build was to refurbish the diff, so he was excited to see her so well progressed, and got stuck into the job list with great enthusiasm:
1/. Hopefully we've now sorted out the brake issue - the drums were not completely true, resulting in them rubbing, resulting in them heating up, expanding the small pocket of air which we couldn't get out of the front brakes because the routing is a daft up-and-over design between the two slaves on each drum, and then them binding on; so he's deglazed and trued up the drums, replumbed the slaves so the air pocket can't form, and had the front and rear shoes all refaced with new material as all had suffered from the overheating; he's managed to get decent pedal feel and they appear at this stage not to be showing signs of binding on.....touch wood....
Before and after (watch the rim)

2/. Run the car up on the dyno to work out why she was pinking and over-running (dieseling) - turns out she was 25 degrees too retarded, had plugs that were too hot and too long, and was running two needle sizes too lean (albeit these previous settings were the ones the manual recommends - which goes to show you should never trust what you read :)) - before sorting the problems, she was putting out 85HP at the rear wheels (which I thought was pretty good for a 60 year old engine design); afterwards she's up to 97.5HP, and that's tuned for and running on 91RON fuel in preparation for the poor quality fuel we will probably encounter in Mongolia; as you will see from the chart below, the air fuel ratio was dangerously high at 15:1, and now is a more manageable (and less detonation-likely) 12.5:1. It does mean she's a bit rich at tickover, but based on yesterday's run, once she clears her throat, all is well!
Dyno before: 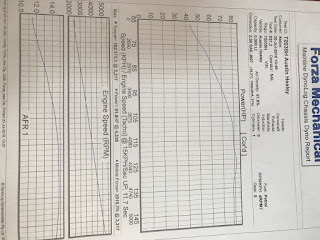 3/. Next Garth gave the doors a bit of biffo and they now shut straight and true; now I just have to find some rubber to seal the air gaps remaining.... 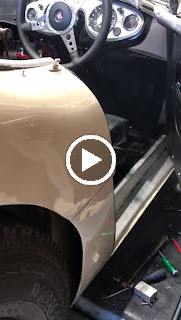 4/. We agreed that fitting a high torque starter to replace the (albeit refurbished) Lucas number that was in there is probably good insurance - on the basis that we will be starting her from stone (often freezing) cold every morning, I want to minimise the draw from the starter to allow the sparks to do their thing
5/. And finally replaced the speedo cable so it should now work, even if our choice of tyres means the speedo is willfully inaccurate

Garth dropped her off yesterday morning, with the parting comment that I needed to run her up to full temperature, and try to work out a way of getting heat into the engine. This is not a problem I had expected to encounter, given all we have read about Healey engines running hot more generally. So I took her out for a run over to Bondi, as I had to pick up the intercom that we'll be using for the COTT out at Alice Springs in a couple of weeks from there anyway; and sure enough, even sitting for over an hour in slow and stationary traffic in inner-Sydney, the water temperature refused to go above 175 F, and the oil temperature didn't budge off the stop at 40 C. I was actually starting to think the oil gauge was faulty - given we bought it new from one of the UK suppliers, and our experience in some of the quality control standards from these guys has been less than perfect, I am still holding out hope that it is working, and that the problem is we are simply not getting enough heat into the engine. This was noticeable before Garth had a go at the tuning, but as he has put cooler shorter plugs in as well, the issue is even more pronounced.
Otherwise the run yesterday went really well, and the brakes not only have excellent feel, and certainly stop Gidget very effectively, but also showed no sign of binding, which is great news.
So today, apart from refitting the bash plate covering the pedal box (which we have left off to allow the brake issue to be fixed), I also have to fashion a temporary solution for a radiator cover. Who would have thought it, in Australia?! Then give her a wash a buff up, and she'll be ready to go on the trailer on Friday when Giles turns up to pick her up and set off for the middle of nowhere.....
Posted by Ashton at 18:29