I took the car out to Classic Car Clinic so Steve could change the oils and do a final once over of the car before I head to Sydney, and in the meantime did some final work with Andrew.  One of the items with Andrew was to amend the ex-Mercedes jack that we are using in order to give it a more stable base - And his brilliant idea was to make it fit into the base of the jack stand we are using, which of course would mean the jack stand base would be performing two jobs !   As usual his work was excellent and the jack now fits suggly into the base.   Ready for use.

Once we got the car out to Steve, he changed the oil from the running-in oil we have been using to Penrite HPR30 20-60 mineral oil.  While doing this, we had also recieved a new oil pressure relief spring and valve from England which we hoped would relief our high (80 psi) oil pressure.  The spring in there previously was severely out of spec, and in hind sight was probably fitted into what was then a very tired engine with low oil pressure, in an effort to increase the oil pressure !  Now we needed to reduce the oil pressure !  With the new spring and valve fitted, and the oil changed and the sump plug wired, we ended up with 60 psi - Much better.   With the help of the sales team at Autobarn, I also finally located the (Australian brand Ryco) equivalent to our UK sourced WIX oil filters, including the larger sized unit which should increased the filtered volume of our oil.  Ironically the Z9 unit is one of th emost common in Australia and used on Ford Falcons !


While the car was up on the hoist, Steve took the drums off to check the brakes - And found the shoes were all cracked !  While we knew we had previously experienced some binding of the brakes which created some extra heat, there is no way this should have caused this degree of cracking after only a few hundred miles.  So we took all the shoes in to Wayne at Better Brakes who always does the bonding of new liners to shoes on a Wednesday evening, so hopefully we would be able to refit the brakes before I left for Sydney on Thursday, only delaying my trip for a couple of hours.

While all this was going on, I was making up stuff for the boot and storage areas of Gidget.  One area we have to address is a cover for the spare wheel where it protrudes through into the passenger area - With the fuel tanks in the boot, it should really be
sealed off from the passenger cell.  Andrew had suggested using Aluminium Composite panels as used for advertsing signs as it is cheap, light and easy to bend shape and cut.  So having bought a sheet, I started to make the shaped cover, and Andrew was right, it is great to work with.  I shaped the material around the wheel it was to cover, bending it gently to get the correct shape.  Then I cut a top and bottom using the jigsaw which cuts through the composite like butter and used small angle iron to connect everything together, pop rivetting it as I went.  Finally I covered the whole with the same marine carpet I have used in the car, and was ready to fit it when the car returned.

A new set of wing mirrors arrived from the UK on Wednesday, so I took these down to CCC and Steve and I fitted them, using riv-nuts, so we will now be able to see what is behind us.  At one point Steve had noticed a drip from the wheel, and found that one of the brake cylinders was leaking - Once again new units which have only down a few hundred miles.  When we inspected it, the bore was scored - And a second unit we inspected was also scored !  These are supposedly brand new units, so once again we have an issue with supplied parts.  We ended up replacing all 4 wheel cylinders with the original Girling units which I had had refurbished presviously, and will be taking yet another part complaint up with the supplier. We also fitted the skidplate which had been off for a while while we did everything to the car, and on Wednesday evening I collected our new brake shoes and planned to take them down to CCC early on Thursday.  Meanwhile I was packing as many of the spares as I could into both the underfloor storage areas and the boxes in the boot so I would be ready to load the car and leave as quickly as possible once the brakes were back on.  Early the next day I was down at CCC and we set to work.

The left front wheel went on easily, but the right front just would not go on - The brake shoes were just too thick, and however we adjusted them made no difference.  Eventually I took them back to Better Brakes and they redius ground them again, and I took them back to CCC to try again.  Still not good, eventually we managed to get them on although there really was insufficient clearance for correct adjustment.  Once on and adjusted, I set off home to load the car, but it wasn't until about noon that I set off for Sydney.  However after just 20 kms the car started missing badly, and I could also feel the brake shoes binding, so I decided to do a U turn and head back to CCC to try to resolve the issues.  Once there, we bled the pressure off the brakes, still uncertain what was causing this pressure to build up in the system and lock the brakes on, while Steve also found that the contact points in the distributor had slipped which was causing the misfire.   Once fixed, I headed south again.

This time I got as far as Tyndale by which time it was raining so I had the roof up, and it was getting dark, so when I saw a motel beside the road, I stopped for the night, and after long and stressful day soon turned in with the intention to start again at dawn.  It turned out that I woke well before dawn so by 5.30 am I was heading down the road.

By 6.30 the car was again missing, and the brakes were binding on again, so I stopped in a gas station and in the morning missed relieved the brake pressure yet again, and also reset the distributor points again, before setting off again.   This time I got several hours down the road before the brake issue started again, and after that I got to the outskirts of Sydney before once again having the problem.  This really is weird as to why this pressure is building up in the system, as if a relief valve is not fully opening.

After a long day, I finally arrived at Ashton's house in Sydney, relieved to have finally made it. After pussling over the problem for a while, we decided to attack it the next morning, and I got some much needed sleep.   In the morning, we dismantled the front brakes and found not only lots of brake dust, but also cracks in the new shoes !  This was really becoming tiresome and very
frustrating.  After talking with Steve and also Ashton's contacts, we decided to grind a small amount off the steel ends of the shoes so as to create more space for the brakes.  This meant we were working almost in the street as people wandered past, and as there was a local market in progress, there were lots of people and cars parked everywhere !  Eventually we got the brakes back together and after a short test drive decided there was little else we could do at that time. 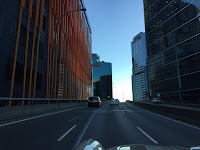 Sunday morning dawned cold but with clear skies, so Ashton and I rugged up before setting off through the city and over the Harbour Bridge to meet other members of the Endurance Rally Club of Australia for a day run up to Wollombai.  We are competing in the ERCA rally in Alice Springs in August, and as this day run was to
incorporate some dirt roads, we thought it would be an ideal outing for Gidget.  And so it turned out - We eventually got into the dirt and Gidget performed exceptionally well, with tyres and car handling the conditions really well.   We had been forced to adjust the brakes once on the way out, but after that, apart from a few minor adjustments to try to get sufficient pedal field, the brakes didn't bind on again.


One gauge we have bought is a Tyre Dog, which measures the tyre pressures and temperatures constantly.  The temperature function allows us to quickly see if there is any temperature increase in a wheel, which is much better than waiting until you can feel the brakes binding.  After crossing Wiseman's Ferry, we ended up at a very crowded Wollombai pub for lunch where we chatted with the other people on the run, including several who have previously competed in the Peking to Paris event.
We suffered a small embarrassing problem when I went to move the car into a closer parking spot, and on doing a quick U turn went off the edge of the road after the brake pedal went to the floor when I tried to stop !  I had to be pulled back by a 4 WD, but at least we found that the rear tow straps worked !  I think I shall stick to the navigating and leave the driving to Ashton !  Once we got the car moved, several of the other people on the run inspected the car and agreed that while it was not an ideal P2P vehicle, it certainly seemed to have most of the requirements to enable her to complete the rally.

After a very delayed lunch due to the many people out enjoying the weekend weather, we headed back to Sydney, keeping a close eye on the brake temperatures.  Surprisingly we had no further issues, although the brakes are still not nearly as good as they need to be - We definitely have not resolved this annoying problem yet.  However an excellent day, covering some 300 kms of fairly hard driving and allowing Ashton to get used to driving
Gidget.  She certainly performed very well - Apart from this brake issue.  I am now going to fly back to Queensland tomorrow while Ashton is going to have his people go through Gidget and amend some of the know issues we have. Then in 3 weeks or so I shall come back down in my 4WD and then tow Gidget out to Alice Springs for the rally.  In the meantime I will have a break for a while !!


Rest of the pics are here :-  https://photos.app.goo.gl/wzYX5keYovHwZtE39