Well, Christmas is over and we are into 2018, so we can now say "It's next year" when we talk about the P2P - And then panic because there is still so much to do !!  As soon as I got back to Queensland from my very enjoyable break away in WA, we hit a snag - I don't know if anyone remembers, but way back when we took the engine apart, we found that the timing chain cover was "sick".  The
previous engine rebuilder had not only fitted an incorrect crankshaft oil seal, but it was so "incorrect" size wise that they had to weld tabs all around it to hold the seal in place !!   We had hoped that it would be any easy task to repair the damage, but we found out this week that it is "irreparable" - Or at least, it would cost more to repair it than to buy a new one.   As these are another part that are like hen's teeth, we had trouble finding one (they are normally sold on an "exchange" basis - You send your old one back, but ours was considered too badly damaged). We did eventually find a new one which is now on its way.  And these new ones are better as the seal is fitted from outside instead of the inside like originally, which means a replacement seal is much more easily fitted. Unfortunately, this is holding up the engine installation.........

The engine now has its alloy head on, along with all the rocker gear, and is looking good.  Distributor drives were a big issue this week - Opening up a new can of worms and yet another whole new learning experience !  Apparently a "real Healey 100 engine" has a two bolt fixing system for the distributor and its associated
clamp. Apparently ours is an "Austin A90 engine" as it only has a single bolt hole. (I am a bit perplexed, because I thought all "Healey 100/4 engines" were the same as "Austin A90 engines", the car from which they were sourced, but apparently not.)  Anyway, we were advised to modify our block to a two bolt system.  However, it is odd that UK suppliers like Denis Welch actually supply single bolt alloy clamps because they reckon they are much better (clamping wise) than the old
steel clamp.  The steel clamp can apparently be overtightened, and this in turn breaks a small alloy rim in the distributor, which in turn makes it even harder to toghten properly, leading to further overtightening, etc etc. (You can see that the original steel clamp bolt is already bent from overtightening)  The alloy clamp is machined around this rim, making it clamp effectively without breaking the rim.  Or something like that.   We were also advised
to use a disributor mount, like the green one in the photo )actually from a Mini, but similar.  But even that only has a single (recessed) screw into the engine block, and then two holes for the clamp to bolt into. This Mini mount (or similar) can't be used because it is too thick - that would move the teeth on the disributor drive higher than the teeth on the camshaft which turns it, and ensure it doesn't work.  So - We are going our own way and going to use a single bolt alloy clamp, and a thinner mounting plate. We will find out pretty quickly if it works or not !  We really appreciate the excellent information and advice we receive from people far more knowledgeable in the cars than we are, but sometimes there seem to be some incredible differences between all the models, and sometimes we have to stick with what we have already.


At this stage Andrew was working on the front LH fender to cut out the ventilation area for the exhaust system.  There was so much bog in the lower half of this fender that when he cut it off, it nearly cut his toes off it was so heavy - You can clearly see how thick the bog was compared to a standard piece of steel !  With the new lower piece of panel welded into place, Andrew had to fabricate a lower section for it in order to attach it to the lower sill - And he inserted 6 holes into the panel so that both water and heat could easily escape - A nice touch.  I think we may need a mirror under our car so people can see some of the intricate work that has been done to it !!  Once completed the hole was cut in the new panel and the ventilation grill shaped to fit.


Meanwhile Steve suggested that the long spring pan bolts on the front suspension hung down too far, and might get damaged by flying stones making it hard to undo them in future.  So I spent the next hour or so carefully removing the bolts one at a time, and inverting them.  Shortly after that, it was suggested we change the lock washers and standard nuts to nylock nuts as they would be less unlikely to come loose - So I did them for a fourth time !  They are good now !

We have known for some time that the lower face of the front chassis cross member had some rust in it, and as this is where the car is jacked up, and is also the main cross member beside which the front suspension will be working very hard, we planned to replace the lower part of this important cross member. However, on closer inspection with a very large hammer, the bottom of this section was found to be paper thin, and it was decided it would be wiser to replace the entire cross member.  Luckily there was a lenth of box section of exactly the same dimension
steel in the workshop, so the cross member was cut right out - And found to be much worse than originally expected.   The bottom had obviously rusted through before, and someone had just welded a thin piece of steel across the rust
in order to cover it up.  Again, I don't know if you remember, but when we originally cleaned and inspected the chassis, we found a weld that was missing on this section, apparently right from day 1 in 1954, so maybe the water had entered through this line where the weld was missing ?   Either way, the front cross member is now much more solid.


To replace this front cross member, we had to remove the radiator above it, which we needed to do because it fouled the new steering column and box.   As with so many things on this car, we have replaced original non servicable or damaged items with newer units, and they are often slightly different from the originals.  In this case, the steering box is slightly wider than the original, so we had to cut a small section out of the side of the radiator shroud so they wouldn't rub - No we didn't cut into the radiator iteself, just the shroud around the edge !


Next we went to install the new fuel guage sender unit into the new alloy fuel tank, both of which items we purchased from the same supplier in the (vain ?) hope that they might fit together.  Unfortunately the 6 screw holes didn't line up, and the recessed mounting area had not been replaced centrally, which meant we couldn't just move the sender unit over so the holes lined up, but actually had to rearrange all the holes in order to make it fit.   One wonders sometimes whatever happened to Quality Control and ISO9000 etc.   This supply of parts that are just not fit for purpose is something we are finding time and time again now we are trying to put everything together, and it is really frustrating and time consuming. 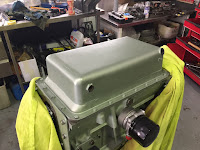 Meanwhile I was fitting up the rear brakes, and Andrew had welded in the sump plug (including tab for wire locking) and the oil temp sender plug into the new sump, so I was able to paint it the correct engine colour and get it installed on the bottom of the engine block.
Finally Andrew welded up a recess in one of the chassis outriggers where the original exhaust used to run.  As our exhaust is now on the side of the car, this recess is not longer required so it was reinforced by letting in a new piece of steel.


All the other pics are here :- https://photos.app.goo.gl/lYU6CHPYoXwAKKCy1