0029 We go rallying while Gidget gets painted

Some weeks ago Ashton thought it would be a good idea for us to do a car rally (or two) just to make sure that we could actually sit in a car together for a few days, and also so that we could work out how to use the Monit Rally Meter which we will need on the P2P.  So he chose the Targa High Country event based around Mt Buller down in the Victoria High Country / ski fields - Truly one of the most spectacular areas in Australia in my opinion, especially when the sun is shining.  And for all 5 days we were there, the sun was shining !   Perfect conditions for a great trial.


I drove down to Sydney in Troopie the Land Cruiser, coming
through an enormous thunderstorm, and exploring the beautiful coastline N of Sydney, before arriving on Tuesday evening.   Ashton and I hooked up his trailer, loaded his Lotus Elise, and put the tools and helmets and everything else in the back of Troopie, ready to leave early in the morning - And went down to the pub with his wife Caroline and dog Jasper.  (The cats and ducks stayed at home !)

Crack of dawn Wednesday we were up and headed out of Sydney
down the Hume Highway, meeting up with another group of Lotus friends and their cars for a coffee at 7 am before driving in convoy for the remaining 6 hours to Mansfield and up the hill to Mt Buller.  We were staying
in one of the ski lodges right beside Burke Street, the name of the main lower ski run.  There was even a little snow left in the middle of the run !  We then had a sign-on first, followed by a driver's briefing, and then we had to take the cars into the main square for scrutineering.  After we passed that (horn needed a bit of rewiring before it would work !), we drove back up to the lodge, and had drinks and dinner while we renewed a lot of friendships among the 21 other Lotus drivers and co-drivers, plus a few family members.

Next morning we had to get the cars "stickered up" with all the required numbers and other stickers, and the Simply Sports Cars crew had this all organised - As usual.   All the guys pitched in, and soon all the cars were not only clean but resplendent in their
Targa High Country stickers,
and we were off up the hill to a big lookout for a group photo. It took a while for Stu to get everyone parked up so that everyone fitted in, while ensuring that no one disappeared down the steep drop off at the back !

We went into Mansfield for lunch and to buy a few things (like a stop watch !), and then we were back on the mountain for a great supper before turning in so we would be ready for the rally start on the Friday morning.  We had purchased some additional pace notes which I thought were pretty daunting when I first saw them.  But as I worked through the 6 stages we would be doing tomorrow, I started to get a bit of a feel for them.  This was, after all, not only my first real rally, but also the first time I had sat in the passenger seat and had someone else doing the driving while I had to read out the pace notes - Not an easy transition, I can assure you !

In the morning we had our breakfast, and met down at the start for our first stage - A sprint down the winding mountain road from Mt Buller summit - Only 7 kms, but a LOT of corners !
I won't go into all the details of each stage, but by the end of Day One we were in 5th place, and learning a lot ! Day one was all medium length stages, with nothing over 18 kms. Other Lotus' were in 1st, 2nd, and 4th places.

Day two was a later start with much shorter stages, with the final one of the day being around the streets of Mansfield.  Ashton and I were doing OK, but on the final twisty Mansfield stage had a bit of a "moment" on one corner, having to reverse away from a hay bale, and as a result lost quite a few points which put us down to
5th - But then the stage results were scratched due to other issues, and we found ourselves still in 4th place ! After the Mansfield stage we were all parked up on the main street for the spectators to enjoy, while dinner that night was in the local pub in town.   Another great if exhausting day.

Day three was an early start, with 2 long stages of 49 kms and 40 kms respectively, a couple of shorter ones, and then the final stage of over 18 kms up the mountain back up to Buller.  This was a 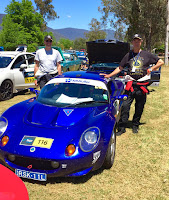 really testing day, both mentally and physically - First of all from a pace notes point of view, and also from the effort of some 37 minutes of being wedged in the seat, head down, reading pace notes out of the book and calculating the mileages and times from the gauges on the dash board.  For the first time in my life I honestly felt a little car sick by the end - But it was so much fun at the same time that once we had finished I was fine.  I also have to admit that with the weight of the helmet, even my neck was starting to ache from the effort of keeping it upright on the corners, and my mouth was totally dry after 37 minutes of non stop calling the notes !!  But what a buzz that stage was - And we did quite well on it.  After lunch, we then did it in reverse, and did even better, only losing one point overall.

The final stage was flat out up the mountain, finishing just off the village square, where every one who had already finished was standing watching the action at the final hairpin while enjoying a cold one at the end of a hard 3 days.   We almost got the run up the hill spot on, and as we came round the final corner  we had a bit of a "moment" which made it quite exciting for a moment, and was caught on video !  We then drove slowly into the main square where we passed through the official finish archway and received our finisher's medals before parking up, watching the remainder of the competitors arrive, and enjoying a cold beer
ourselves !

Final result in our division were Lotus 2nd and 3rd, unfortunately displaced by just a single point by a Jaguar F Type that was well driven all weekend. We dropped to 7th, just not quite nailing a couple of the stages on the last day, but there were 5 Lotus' in the top 10, which is an excellent result for the group and SSC who supported and organised us so well throughout the weekend.

In the outright group, two Lotus Exiges ended up tied for 1st place - 3 days of rallying and they couldn't separate them !   A great result.

Just to clarify the "method" of our TSD (Time, Speed, Distance) group, the rules are that you cannot go over 130 kmh, and you cannot go under 30 kmh at any time, or you get penalties.   You are given written stage details of the route, the length in kilometres, and the exact average speed you must maintain.  From this you can work out in advance the exact moment you must cross the finish line.  So you tend to go
out hard, "banking" some spare time by getting your average speed up above the target rate slightly, and then trying to time your run to the finish line precisely.  This would be easy if the finish was a lovely straight road, but they usually ensure there are lots of twisty bits at the end, so the last 60 - 90 seconds is normally a very fraught time in the cars, with the driver wanting as much information as possible about time and distance remaining, and the navigator doing his own last minute calculations while also trying to read the corners and count down the final 30 seconds.  It sounds fairly easy, but I can assure you it is not !! Both Ashton and I know where we messed up, and we are confident we can do a lot better if there is a "next time".

Overall it really was a fantastic weekend with perfect weather in one of the most scenic parts of Australia.  And in addition to the rally, we spent the whole weekend with some of great friends, and got to know others as well.  What more can one ask for ?  I thank Ashton for giving me the opportunity to participate - His little Lotus Elise performed perfectly all weekend, and, as a first trial run for our commpatability in the small space of the cabin, I think we did pretty well.    Now it is time to get back to working on the Austin Healey !


After a good final dinner party that night, we were up and packed early and ready to go and load Elise on the trailer to head back to Sydney - When I realised my car keys for the Toyota were in the pocket of my jacket - Which I had left in the restaurant last night !!  Whoops !    Luckily for me, within half an hour we had tracked it down, and were away !  Once down the mountain, we picked up a coffee in Mansfield and then headed back to the Hume Highway and Sydney, getting back there by about 2 pm.  We unloaded the car off the trailer, took out all the rally stuff and loaded back my camping stuff and also some Austin Healey parts (like our "new" (original) cylinder head), and I headed straight out of Sydney before the traffic got too bad, while Ashton had to get back to work.

I got some 4 hours up the road before I stopped at a free roadside camping area in Bulahdelah - One I
have stayed at many times before, located beside a lovely river.  I had some quick noodles for supper and was fast asleep by 8 pm, exhausted.   Next morning I was up early, and continued north, arriving home by about 2 pm.  What a week !  It was exhausting but a great change from working on the Healey every day.


And what of Gidget, our Austin Healey Adventure Girl ?  Well, while I have been away, she has been transformed from an ugly
duckling into a beautiful swan !!   Well, almost !!   She has spent the week in the paint shop and the basic chassis, boot, cockpit, and

engine bay  have all been
painted in what is to be her final colour of Coronet Cream.   I cannot believe this is the same car !   So she is all ready for parts to start being added back on - A few minor bits and pieces still to do, but otherwise ready for "reconstruction" !!    Maybe I should go away more often ???


Rest of the pics are here :-  https://photos.app.goo.gl/MZHlg3ujKfcO9g2y2