Having now got many of the front suspension parts off the car and at home, it was time to set about trying to clean off some of the grease and dirt to see which parts were still usable, which were servicable as spares, and which really need to hit the rubbish bin.  A visit to CCC workshops saw Andrew trying to make a mock up of the suspension so he could set the caster angles correctly when fitting the new adjustable front damper mounts. (The dampers form the upper suspension arms, so therefore the caster angles.)  Originally specified at 1 3/4 degs, later cars were set at 2 degs, so we decided to go with that.  These units are adjustable so we can fine tune everything later.

Following last week's degreasing and cleaning of the chassis, I also put a coat of POR15 anywhere that didn't get in the way of Andrew and his welding, which made the front section look much more "ready" (Hey, we need to at least feel we are making progress !)  Then it was back home to the cleaning work !

Janet's car has been relegated to the driveway while I am making
a mess inside the garage, and I have set up my trestle table so I can clean and sort the many parts I am collecting.  Many of the photos I take serve as a reference for me when trying to put them back together later, so in this entry you are best just to skim through the photos and see some of the mess I am trying to clean up !   Some of the "highlights" are :- 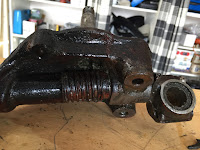 King pins and stub axles that I am not sure have ever been off the car.  The grease does not look fresh, or even from this century, while the dirt is just caked on there and needs a wire wheel to remove.

The rubber bushes, without exception, just crumble. There was no way they were providing any stability or support.  Some cork washers just come out in pieces.  And where there were steel central tubes in the bushes, these have just rusted solid onto the bolts.  Lots of soaking in releasing agents is seeing most parts separate eventually.


When I took the brake cylinders off the original backing plates, most were "free", but one was absolutely rusted solid.  No wonder Ashton felt the brakes weren't very efficient when he drove the car down from the Blue Mountains last year !!  I took them over to Wayne McKew at Better Brakes (who refurbished our master cylinder) and he spotted that all the cylinders had in fact been resleeved as some stage, so should clean up OK and be serviceable.  So we will do that and take a couple as spares.  The fluid in the system did not look too good - Very watery, and I wonder when it was last changed !!

On 21st Sept I went over to Nerang Differential and picked up our refurbished gearbox from Alistair. It had been slipping out of 5th when Ashton drove it, and Al had pinpointed the problem, put in replacement parts and seals, so it should now be ready for the P2P.  I loaded it into the back or Troopy, along with the roll of heat shielding, and set off to see Greg at Red Devil radiators.


Greg had our new radiator in "mock up" mode -  ie everying on and
mounts fitted, but not fully brazed or painted, so if changes were required, it would not be an issue.  So this was put on the front seat of Troopy, while down in the foot well I had various king pins and bushes that needed the bigger vice and a bigger hammer than I have at home in order to separate !   I think I have more Healey parts in my Troopy today than there are on the Healey !!


Arrive at CCC, unload the gearbox, and fit the radiator in the chassis - And it fits perfectly.  We are also going to be able to move the top of the radiator forwrds slightly, further increasing th clearance between the core and the fan.  And in studying it, we decided that we can fit rubber bushes on the side of the radiator which, in addition to the ones we are going to fit underneath, will then make the radiator fully rubber mounted, and hopefully isolated from any chassis twisting or bumps encountered along the way.


Then it was on to the floor and the seats.  Andrew found that the
new floor panels have their strengthening shaping in exactly the wrong places for the seat runners, while at the same time they were relatively thin and would flex with the strain of the seat on there.   So he first of all welded in a cross brace so that the seat had a firm mounting, and then he made up his own floor panels with the strengthening shapes in the correct places for the seats !  So now we have some good AH floor panels for sale !!


Andrew also started welding in support gussets for the front suspension - All similar to those done for the competition Healeys in the 1960's.  One issue is that the original welds were left with a lot of slag on there, and this apprently makes it really difficult to MIG weld now.  So he is going to try to come in on the weekend and mini sandblast the areas around the old welds to clean them up a bit more and hopefully resolve the problem.

The new front damper mounts are in place and looking good.  Tape placed over all the bolt holes to stop dirt and grit getting in there while we work on the rest of the car.

We also measured up some of the larger MGB front dampers to see how much of the inner guard we need to trim away to make them fit.  I need to find out what the fluid volume of the MGB unit is compared to the Healey one.  We will still plan to fit some heatsink to them to help remove the heat, but with a bigger volume we should be better off overall anyway.

Then we put a seat in place and did some trial sits in it.  It seems
the seat itself (the bit you sit on) is very high, making us sit high in the car, but Corbeau has said that this seat will squish down quite a lot with use.  So we will persevere for now, but we do not want to have a roll bar that is way up in the sky - It would look ridiculous.

Then it was back to cleaning and degreasing.  There is a little spring
section in the stub axle that acts as a dust cover over the king pin.  Well, it certainly keeps the dirt out - Whch then collects on the outside !  The spring itselve had so much dirt between every coil that it took me half an hour with a small scredriver just scraping out the dirt between each coil so I could then compress the spring and get the unit out and start cleaning it.  Unbelievable.


Now everything is ready for painting, and I can start putting more pieces back together !  I am just hoping I can remember where they all go and how they fit together !!

Rest of the pics are here :- https://photos.app.goo.gl/bOKiRdnFaj9rzrn33