0025 In which we delve into the engine

We continue to work on several aspects of the car at once - Juggling about 50 balls at once is about how it feels at the moment !   So, in order to make some space at Chez Cooper, we dug out the old "floor panels" (if you can call them that), and took them down to the rubbish tip.  Having not seen an original floor of a Healey before, I was stupidly keeping these in case we needed them again !   Now I have seen what the floor panels SHOULD look like, I realise what a terrible installation these galvanised tin sheets really were, and took them down to the tip.   NOT NEEDED !!


I then got the original seats out and photographed them because with a bit of luck someone might want some "original" seats for their car, and be willing to buy them off us, so putting at least a little money back into the coffers of Gidget the Adventure Girl !  Over the coming days and weeks I will be sorting out which parts of the car might be useful to us as spares, which parts are in a condition suitable for resale, and which parts are rubbish and suitable only as a free gift or for disposal !

Meanwhile I was starting to build up the front brake back plates and the new front spindles / stub axles. All the cleaning up of parts off the car was enabling me to start assembling these stub axles.....until I came to a halt when I tried to insert the new king pins into the new stub axles - They seemed very tight.  I didn't force them, and on my next visit to CCC I asked Mark about this, and he quickly advised me that there is a special king pin reamer, and all the bushes in the stub axles require reaming
prior to fitting.   OK......So who has a king pin reamer ?  It appears this is a specialist tool as it is a two step reamer, however Mark mentioned that Peter Janetzki over at JH Classic Restorations in Yatala (half way to Brisbane) had one.  So I duly packed up all my front suspension parts and headed off to Yatala - Very close to the famous Pie Shop, if anyone knows the area !

And tucked away behind the pie shop (which I have visited many times), I find JH Classic Restorations - You can't really miss it because right outside are two body-less Healey's undergoing
restoration !  Turns out that Peter and Brett have a great business here, with a number of very interesting vehicles at various stages of restoration - One being a very special V8 Healey with a widened and very special chassis - In fact everything about it is rather special, and I shall look forward to seeing it on the road someday ! Having determined that they had the correct reamer and could fit my king pins to my stub axles, I left my parts with them and went outside for a look at the Healey chassis.  I look closely at any Healey, constantly searching for ideas and clues that we can incorporate into ours, but in this case most of the things I found we have already done, the main item being the reinforced front suspension pick up points.  We have made the gusset slightly differently, but essentially it vindicates what we are also doing, which is good.   Picked up a few other pointers, and then headed back home.

Since we now had our engine out of the car and mounted on an engine stand, it was time to dismantle it and check that all was ok. The original plan was to run the car for 6-9 months on this engine, as we believed it was in reasonable condition, and we then planned to rebuild it before setting off to China. In the end it has turned out to be extremely fortuitous that, since the engine was out of the car while we checked out the gearbox and fitted the new radiator, we decided to have a look at it now.  We thought we had found the worst of the car already, in the rusted/bent chassis and boot floor, or the suspension held on with self tappers, or the seats that were fitted backwards in their bases,
or the dampers that weren't damping, or the gearbox that wouldn't stay in 5th gear, or the steering box that was filled with watery grease and worn bearings.  Or the non-existant bushes in the suspension, or the broken spokes on the wheels.  Or the upside down clutch mechanism, the damaged rear axle, or the cracked steering wheel.  Did I mention the melted fuel pump that nearly caught fire or the pedal assembly held in place by only a miracle ?  I think I make my point - Surely it was time for some good news, and the engine would turn out to be immaculate ?


Sadly, this was not to be the case, and as soon as the head was off, we were faced with our worst nightmare - The bores were all badly scored, the head studs badly worn, and when we removed the sump, we found that the big end nuts were all different - some were castellated nuts, and some were nylocs - Although the plastic on the nylocs did not even engage the threads !

Once the big end bolts were removed, we found that the pistons all had matching scores on them - Obviously they have partially seized or overheated as some stage. Then we inspected the big end shells and found they were not only damaged, but were marked "0.060".  When we checked the workshop manual, it said that oversize could be 10, 20, 30 or 40 thou, but nothing over that - So the crankshaft had already been ground down too far !


After that, we tried to take the camshaft out - but for some reason it was really tight.  Eventually we got it out, and found out why it was tight - The gearing in the centre, which drives both the oil pump and the distributor, had been damaged, and there were broken teeth and loose metal filings. As a result the centre shell was also badly scored.  And once we got the camshaft out and applied a straight edge along it, we found out the shaft was even slightly bent !   About the only thing good so far is the block itself - The cylinders bores seem to have been resleeved and have plenty of life left in them - Phew !!

I then set off for a weeks break in Melbourne with a list of engine spare parts to order from the UK - Fortunately most seem to be available ex stock.  But while I was away, Steve at CCC took the cylinder head apart, and found that too was in bad shape.  At some stage it had been cracked, and a poor quality repair had been made, meaning that it is totally unsuitable for a long distance event like the P2P.  Unfortunately the one thing that seems to not be currently available is a Healey cylinder head - or even an Austin A90 one !  So we are putting out feelers around the world to see if anyone has one sitting around gathering dust - If not, we will just have to wait until January or so when apparently some should be machined and available - We have put our name at the top of the list in case we cannot find one anywhere else.

Meanwhile, Andrew at CCC has refabricated the pedal shaft,
making it into stronger and better positioned unit. Previously the pedals were located so far over to the right of the footwell that it was almost impossible to reach them properly.  This will make a big difference.  He has also refabricated the very worn and incorrectly fitted clutch mechanism, turning it the correct way up (so it now doesn't hang down in an exposed position below the chassis), and also using greasable rose joints, thus making it a much more positive mechanism.

I guess the one good thing about having so many problems on the car is that every single thing we do to it is a major improvement. I personally become very disconsolate everytime we find something else that needs replacement on the car - We knew it would need some work, but I never realised that a seemingly driveable car could have virtually EVERYTHING wrong on it !  It is certainly a major eye opener !  And as I prepare all the parts we have taken off in preparation for putting back on, as soon as we can complete the basic body work, all the parts and attachments should go back on quite quickly. The bare shell is now almost completed - All that is required shortly is to put all the parts back on !!  The gearbox is ready, the suspension and brakes are virtually complete, the stub
axles and bushings are ready, the carburettors and fuel pump and fuel filter ready, the wheels and tyres are ready, one set of dampers is ready and the others hopefully imminent, while the rear axle and steering column and box are on their way from Sydney now.  Additionally the new radiator is all fitted up, and the revised design has gained us an extra 2-3 cms space between the radiator core and the fan.  And last but not least, the Coronet Cream paint is sitting here ready for the whole to be painted. 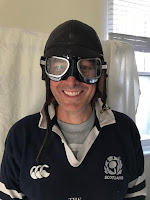 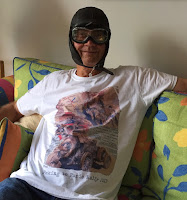 This is truly going to be one hell of a car when we have finished...... Not long now.  Meanwhile Ashton and I are ready as soon as the car is complete, with our P2P fur lined leather helmets and goggles ready for action !!  The only good thing is that with the helmets and goggles in place, no one can really tell who we are, so we don't need to feel too embarrassed about wearing them.

Rest of the photos are here :-  https://photos.app.goo.gl/RFuGIw6eQSbi4gPc2
Posted by Giles at 02:09