5th September 2017
Luckily the wheels had already fallen off !

I went into CCC today just to drop off a template for the panel where the fuel filter and two SU fuel pumps will be mounted in the boot.  When I pulled up, Dave Godwin's gorgeous little MGA race car was there - He is doing a couple of local events before shipping it to the UK for a while to participate in some racing over there.  Should be fun.  I helped him measure up the trailer for shipping purposes, and might well go up to Lakeside this weekend to see him race.  Then I walked over to the garage where the Healey is located - And nearly fainted with surprise when I saw it !

There wasn't a panel on it !!  I was a little surprised because I suppose in my mind everything had slowly been going back together, and now suddenly we had gone back to basics again.   However, this was always going to happen, since all the new panels had only been tacked in place until it was certain that everything fitted together correctly, and now it is time to weld everything up properly.

Additionally, we are taking the radiator, engine, and gearbox out
so that a) we can have the radiator checked out and replaced if necessary, we can work on the engine sump, and lastly and importantly, the 5 speed Celica gearbox can be checked out because on the few occasions the car has been driven we have been unable to select 5th gear.   And to get these large items out, it is much easier to take the whole front shroud off than to try to lift everything out through the small bonnet opening.  And of course, while the engine is out Andrew can work on reinforcing the engine mounts and any other points in the front where a potential weakness is seen.

The cardboard template lets Andrew know what we need, so I have left our 2 new SU fuel pumps and new fuel filter there, and when he has time he can put it all together properly.
Still at the back of the car, the full size wheel with P2P off road
tyre is now in place in the centre of the front section of the boot, with the front of it just poking through in to the passenger compartment in the same way that the original did, albeit to one side.  When we put the interior trim back in, the wheel will be covered by a bag which will make it look smart, and prevent any dust coming in to the car from the boot - or maybe vice versa if the roof is off !!

I then measured up the hole in the boot floor which is where the lowest part of the fuel tank fits, and which needs to be cushioned with rubber sheeting which will be glued in place both to the boot floor and to the fuel tank.  I already have the foam, so this is all under control.


I then had a look at the oil sump, under the engine.  We are aware that the sump hangs down very slightly below the chassis rails, maybe 1/2", so we need to reduce the height of the sump by maybe one inch so there is sufficient room between the sump and the yet-to-be-built full length skid plate so that foam rubber can be squeezed in there to prevent stones getting lodge between the two, and potentially rubbing a hole in the sump.  Obviously by reducing the height of the sump, we will lose some oil content, and therefore the oil will get hotter.  But if you look at the sump, there is a big "step" at the front of it that is several inches long and the full width of the sump - Why is this "step" there ?  So far
no one seems to have a valid answer - The best I have heard is that on the original Austin A90 car, which donated the engine and running gear to the Healey, there was maybe a chassis cross member there so they cut the front off the sump so it didn't hit it.   Anyone know ?  But it would seem logical that while we reduce the overall height of the sump, we will also remove the step, thereby increasing the final oil volume considerably.  That is our plan......unless anyone come up with a valid technical reason why we shouldn't.


I had taken the brake master cylinder over to Wayne McKew at Better Brakes - Several different people had told me he was the best, and when I walked in, I realised why.  When he saw the master cyinder in my hand, he immediately knew it was off an S1 Land Rover.  "Wrong" I said - "Austin Healey".  Wayne got his manual out, and sure enough, the Land Rover and the Austin Healey ran the same master cylinder !  It turned out our master cylinder was in quite good condition, and had previously been sleeved.  The rubber seals needed replacing, and next day, it was all finished and back on my shelf ready to be re-installed later. I also had to paint all the new brake drums, and bake them in our kitchen over for an hour so "set" the Hi-Temp paint.

With all the panels off the car, the engine and radiator are completely exposed, and within a day or so, these were out, so I can now start to get them sorted. Meanwhile, Andrew stripped the last few remaining pieces out of the car - the wiring loom, the dashboard and any guages - There is now nothing left in the car except the bare frame !   And now the heavy engine and gearbox are out, we can put the car onto the dolly that the white Healey was on until recently, so it can now be easily pushed around as required despite having no axles or wheels.  Andrew will now proceed to weld everything up in its final format - The floor, the sills, the jack supports, the boot, the spare wheel housing - Everything - without anything getting in his way.  The plan is also to clean it all off so we can get the inside and underneath primed and painted with POR15 or body colour as necessary.  And once that is done, we can start putting everything back together again ! 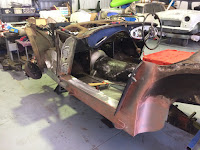 Andrew found a removable panel in the car that still has original paint on it, so we have now been able to take that to the paint shop so they can make us some paint in the correct Coronet Cream colour.  All our efforts to find the paint code, even from people in Canada, has drawn a blank, so finding this panel we can use was a life-saver.  We will now get 3-4 litres of Coronet Cream so we have enough to at least do the interior of the car.


For the radiator, we are not sure whether to go aluminium (lightweight, more compact) or the original copper / brass unit, but with a more modern (and therefore efficient) core. The current radiator is not original, but is a copy of the original, using 1950's technology, so can definitely be improved on.  I had a long and interesting conversation with Steve Bartlett at PWR, discussing all the pros and cons, and I learned a lot about cooling and radiators.  I then went to see Greg Ross at Red Devil Radiators, fortunately located very close (200 metres ?) to our car at CCC, and he took the cooling discussion to a whole new level.  The key factor in this decision is that copper / brass can be repaired more easily than aluminium if it is damaged or punctured by stones, and Greg reckons that he can also make the core thinner without losing any cooling efficiency.  The final deciding factor was that, being so close to CCC, he can come over, see the car, and then design the radiator specifically for the car.  So next week I will get with Greg and we will get started.

I have today taken the windscreen out from under my bed, and delivered it to Nathan and Rod at Glass 4 Classics in Nerang.  They specialize in classic cars, and even had a windscreen for a Healey in stock. When he looked at the existing windscreen, he deduced from a stamp on the glass that it is probably the original unit ! He will let me know if everything is OK next week.

I then picked up the gearbox from CCC and delivered it to Alistair Stevenson at Nerang Differential Services.  They are going to go right through it, and hopefully not only make sure all the internals are good, but also find out why we were unable to get into 5th gear.  These W50 Toyota gearboxes are apparently very robust, so we are hoping nothing untoward is found.

Last stop today was back at CCC, where discussions turned to the only item left on the car - The steering column.  Steve was concerned about a roughness he could feel when turning the wheel, and when we opened the steering box, we found out why.  Instead of oil, it was filled with a thick and seemingly water affected grease, two of the bearings were evidently worn, and the worm and screw were also worn and slightly pitted from corrosion.  This is a potential problem as availability of these units is limited, and we are not sure whether repairs are either possible or effective.   So this needs to be evaluated quickly.   We are also quickly evaluating the possible repair or replacement of the wiring loom while we have everything out of the car.  I now have the wiring loom at the house and will look at it more carefully in the next day or two.

Things are moving very fast at the moment !!