Our competitive results over the last couple of
days of the Classic Outback Trial were not so brilliant, but Gidget continued to perform faultlessly, and since this was the major purpose of this shakedown, we ended up very happy overall.   We actually got too clever and instead of just following the provided time sheets precisely all the way through, ended up compounding our errors and as a result being late (or early) all the way through.  Lesson learned however, but since they do not have "Regularity" stages on the Peking to Paris, we do not have to worry unduly
about it !  In the meantime, we visited some stunning parts of the Northern Territory, and thoroughly enjoyed spending time with all the other competitors.

On the Thursday we had a day off !   That gave us the chance to not only get some cleaning done (of both the car and us !), but also to go into Alice and explore a different breakfast option.  I knew of the Water Tank from a previous visit to Alice, and so Ashton and I were there when it opened and enjoyed a delicious breakfast and coffee.  Then while Ashton did some minor work on the car, I did a session at the local laundromat with our clothes.  We had been washing our own gear in the hotel as a practice for P2P, but there is just so much red dust in our clothes here we couldn't keep up !


One evening ERCA put on a BBQ for us out at the National Transport Hall of Fame, where there are countless old (and not so old) vehicles dotted around the place, some in better states of repair than others !  Rail as well as road history is addressed here, and it was a trip down memory lane for many of us older lads, with vehicles that took us back to our youth !  We then had a good country bbq and natter before heading back to the hotel for an early start in the morning.


Friday saw us heading out to the bush to tackle a series of deep sandy river crossings, so this would be a good test for Gidget both clearance wise as well as from a traction point of view.   Result,
absolutely no problem at all.  Gidget's torque allows her to just power through most sandy sections easily, while he ground clearance is sufficient for her to avoid most obstacles and high track centres.  At the end of the multiple river crossing stage, we ended up at a homestead where lunch was available, or you could sit in the shade and enjoy a picnic lunch.


On the way home we stopped at Jessie Gap - a sandy dry river bed through a deep gorge that, when the rains comes and the water is flowing, must be truly spectacular.  When one considers that rain is so rare in this part of the world, the river, when it flows, has to be a raging torrent to enable it to carve through the rock.  Or maybe it has just taken millions of years to do it slowly ?

The next morning we had a long chat with Bruce Washington about some ideas of further enhancements we need to make to Gidget to enable her to survive the P2P.  Bruce has won the P2P once in his 1929 Chrysler 75 Roadster, and also had a class win, so he knows what is needed in order to finish.  Lots of ideas around the windscreen, mirrors, seats, luggage and camping equipment storage in bags behind the roll bar, tyres, and much more were discussed - He was a great help.

From the start we went out on a long transit stage out to Corroboree Rock, a sacred Aboriginal site.  Possibly some 800 million years old, it is quite a sight out in the middle of nowhere, and to see some of the older cars parked out there was quite a special sight.  We walked around the rock for a while
before heading off to Trephina Gorge.  This is a much larger gorgethan Jessie Gap or others in the area, and we walked all the way up the deep sandy river bed between the rocks walls before climbing the trail up the side and returning to our cars along the top edge, which enabled us to look down into this impressive gorge.
Once again, the thought of how much water and how many years were required to carve this big gorge, given that the rainfall is so sporadic up here.   A very impressive site / sight and and enjoyable walk.

Last "tourist spot" on the way out of the gorge was a quick stop at a 300 year old Ghost Gum, said to be the largest in Australia, before we stopped for lunch out at another homestead.

On the way home, Ashton had a spot of bother with the local constabulary (aka Bruce Washington from the Chev !!), and we had a couple of regularity stages through the scrub.  On the way home we had a bit of a die with Bruce who said we need to get used to other cars overtaking us at speed and throwing sand in our faces - We told him we were already quite used to having sand in our faces so that should be no
problem !!    Back in Alice we went straight round to friend Paul's house where we once again borrowed his airline to blow the worst of the sand out of the car as well as off us personally !!  While filling up with fuel for the next day, we came across
support crew Skippy and Matt getting yet another flat tyre fixed on their Rangie - Not sure how they are getting all their punctures, but we are starting to think they have been going on different trails than we have ! 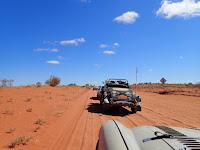 The last day was a relatively short one, and Ashton and I still hadn't quite got the timing right on the regularities !  We will get there eventually, hopefully.   The last stage was in fact the same course as the very first stage of the whole event 6 days earlier - The one where we got absolutely covered in dust !  However this time we did it in reverse, and while that didn't make it any less sandy, we felt we handled it much better this time around.  But it was all a little too late, and we ended up 8th overall, which was a little disappointing because the car was definitely capable of a much better result.  However we now have much more confidence in the car, as well as a list of things to do before we ship the car to China in about March 2019.

After a ceremonial finish with us all crossing the finish ramp one by one, we had a traditional champagne celebration for the 3 placegetters in both the main COT rally as well as for our Regularity event, and then started to pack up everything - Ashton to fly back to Sydney, and me to hitch up the trailer with Gidget tied securely down ready for the long drive home tomorrow.  Tha
t evening we had a sit down dinner in the Convention Centre for the prizegiving and awards, before we all crashed for the night.  Next morning saw us completing the pack up before we met local Lotus friends (and our airline dust blowers !) Randall and Paul for breakfast, and then Ashton set off to the airport while I head south down the Stuart Highway towards Coober Pedy.  Meanwhile most of the rest of the Regularity team were to continue their loop of Eastern Australia, driving back to Sydney via Mt Isa, Longreach, Winton and Warwick - Another week on the road for them.  A number of them are entered in next year's P2P so we will look forward to seeing them in June, if not before.

A great week in Alice, perfect weather every day, a fantastic group of people, and a car that performed really well - What more could we ask for ?

I attach two lots of photos to this blog - the first are our photos of
the 3 days, and the second are the professional photos of Mario and Giusy who had been out in the field all week.  I think you will agree that there are some great action shots in there !  Hope you enjoy them,

Our photos are here :- https://photos.app.goo.gl/hotgtGa7PbrVGrfQ9

The professional actions shots are here :-  https://photos.app.goo.gl/hotgtGa7PbrVGrfQ9
Posted by Giles at 01:02