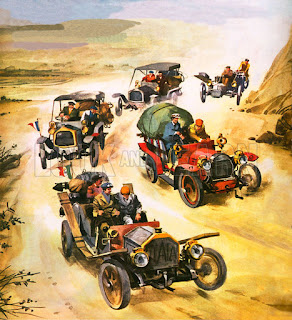 The Peking to Paris motor race was an automobile race, originally held in 1907, between Peking (now Beijing), and Paris, France, a distance of 9,317 miles or 14,994 km.
The idea for the race came from a challenge published in the Paris newspaper Le Matin on 31 January 1907, reading:


"What needs to be proved today is that as long as a man has a car, he can do anything and go anywhere. Is there anyone who will undertake to travel this summer from Peking to Paris by automobile?"


The race started from the French embassy in Peking on 10th June 1907. The winner, Prince Scipione Borghese, arrived in Paris on 10th August 1907.

There were forty entrants in the race, but only five teams ended up going ahead with shipping the cars to Peking. The race was held despite the race committee cancelling the race.

There were no rules in the race, except that the first car to Paris would win the prize of a magnum of Mumm Chanmpagne. The race went without any assistance through countryside where there were no roads or roadmaps. For the race, camels carrying fuel left Peking and set up at stations along the route, to provide fuel for the racers. The race followed a telegraph route, so that the race was well covered in newspapers at the time. Each car had one journalist as a passenger, with the journalists sending stories from the telegraph stations regularly throughout the race.
It was held during a time when cars were fairly new and the route traversed remote areas of Asia where people were not yet familiar with motor travel. The route between Peking and Lake Baikal had only previously been attempted on horseback. The race was won by Italian Prince Scipione Borghese of the Borghese family, accompanied by the journalist Luigi Barzini Sr.  He was confident and had even taken a detour from Moscow to St Petersburg for a dinner which was held for the team, and afterwards headed back to Moscow and rejoined the race. The event was not intended to be a race or competition, but quickly became one due to its pioneering nature and the technical superiority of the Italians' car, a 7,433 cc (453.6 cu in) Itala 35/45 HP.
Second in the race was Charles Goddard in the Spyker; he had no money, had to ask others for petrol, and borrowed his car for the race. He was arrested for fraud near the end of the race. Some of the other cars had difficulties in going up ravines, across mud, quicksand, and
bridges across rivers not designed for vehicles. The Contal cyclecar became bogged down in the Gobi desert and was not recovered,        with the crew lucky to be found alive by locals. Barzini published the book Peking to Paris in 1908, filled with hundreds of pictures.

In 2007 the Endurance Rally Association staged a rally to celebrate the centenary of the original 1907 race. Unlike the 1997 event, also staged by Philip Young, which took a southerly route, this event followed more faithfully the route taken by Prince Borghese in 1907 in the winning Itala. From Beijing, competitors went north to the Mongolian border at Zamyn-Üüd and, as with his original route, north to Ulaan Bataar. The route then went west across Mongolia, crossing the Russian border at Tsagaannuur, through Siberia to Moscow, on to St Petersburg (where Prince Borghese attended "a great banqet") and then through the Baltic states to finish in Paris. 126 veteran, vintage, and classic cars took part, the oldest being a 1903 Mercedes. The major challenge of the rally proved to be Mongolia and the Gobi desert with no conventional roads, merely rutted tracks at best. Despite this, 106 crossed the finishing line. The rally covered 10,000 miles (16,000 km) in 36 days.

2019 will see the 7th running of the event, organised by the Endurance Rally Association.  To see details of the 2016 event, and some amazing photos, see here http://www.endurorally.com/pages/the-peking-to-paris-motor-challenge-2016