As with all good stories, it is quite involved, but it is the detail and the coincidences that make it worthwhile in the end.

Ashton Roskill and Giles Cooper first met through ownership of their Lotus Elises when attending a big Elise gathering at a track day at Knockhill in Scotland that was a part of an event call Tut Towers in 2002.

We both returned to Australia at about the same time in 2003, bringing our cars back with us, but we found no real social organisation for Elises in Australia, such as we had become accustomed to in Europe.  Having seen the social benefits of groups like Scottish Elises, with the internet skill of Ashton and Kyle and a couple of others, it wasn't long before Aussie Elises was created, and this provided not just an informal on-line forum, but also an Australia-wide opportunity for owners of Elises, and eventually all other things Lotus, to get together and enjoy a mutual friendship through their cars, as well as sharing technical information. 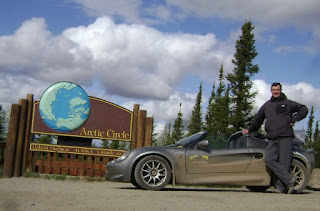 Some 9 years later, Giles set off in his Elise to Alaska, becoming the first person ever (stupid enough ?) to drive up the Ice Trucker's Highway to the Arctic Circle and beyond.   This trip cemented his life-long love of travel with driving, and on his return to Australia 6 months later he sold his Elise to buy a "more suitable vehicle" to travel the world in, and in 2014 set off to Alaska again, this time in a Toyota Landcruiser.   He then drove all the way down through Central America to Tierra del Fuego, followed by Europe and N Africa in 2015, and Iceland, Canada and the USA in 2016, after which he returned home.  After getting home, he was wondering what to do next, when Ashton called him and asked if he would be interested in driving from Peking to Paris, via Mongolia, Kazakhstan, Russia etc. Giles took about 0.5 of a second to consider the offer, and at that moment, the idea was born.

Ashton has been involved in motorsport since 1983, when he did dirt-track racing in a Mini in Devon. He later went forest rallying in an Escort RS2000, and even did motorcycle racing at Knockhill in the 1990's (I always knew he had a screw loose !!).

Since then, back in Australia, he has taken part in many club runs and CSCA competitive sprints in his little blue S1 Elise, and is known for getting it around the track a lot quicker than many supposedly faster cars !  Very recently (the end of 2016, in fact), he completed the build of a very special 1956 Lotus XI  which, despite being some 60 years old, had in fact never been put together before, having always stayed in kit form with all its previous owners.

He debuted this beautiful car at a Lotus track day at Winton in October, and the following weekend took part in the Targa High Country in Victoria, which put a big grin on both his and his co-driver's (David Buntin) faces !

Now we just have to get our act together, prepare a 1954 car to a standard that will enable it to be driven across the Gobi Desert where there are no roads, and rivers to cross, as well as raise enough money to enable us to do it.    It promises to be a true Adventure of a Lifetime.   This blog is to document our adventure from start to finish, to post photographs, and to share our adventure with all our friends and family worldwide. Enjoy.