So in his absence, I have been let loose....and what we're finding is not all good!

When we left off, the car had been hauled off to spend some time with Mark and the team at The Classic Car Clinic;


The list of tasks we agreed with Mark was broadly as follows:

1) Front floor panels, rear upright panel, boot floor and bracing, to be replaced using new parts supplied by AH Spares
2) Fabricate cut out for side exhaust. Keep hinge backing plate and tack back in, so we can re attach lower door hinge.
3) Weld battery cable earth mount onto RH side (instead of current LH side) so as to shorten earth cable.
4) Remove rear axle and replace with five stud when delivered.
5) Weld in gusset at front of gearbox X member and anywhere else necessary.
6) Reinforce all rear suspension pick up points - "Wrap them", Paul Grogan said
7) Reinforce front valence where it attaches to front arms of chassis.

So Mark started as all good car restorers do, by removing more of the car :)
In this case, the four-stud axle which we are replacing with the later five stud:
Then the five-stud turned up:
Mmm - that needs a bit of work then. We have the new half-shafts, but still need to get the brake parts ordered; the diff will need checking out/rebuilding, and then the axle will need to be built prior to re-installing.

Next arrival was the AH Spares steel (rather than cast-iron) manifold, which is designed to allow for either the usual exit along the floor or, in our case, a side exiting exhaust; we've chosen to replace the cast-iron manifold with a steel one so that, should the worst happen on the rally, the manifold can be welded.
Mark has started on the pax-side panels, preparing to cut out the insert for the silencer....and found rather a lot of bog, fibreglass and, behind it all, rust: 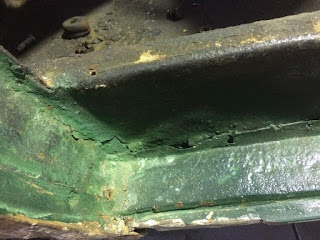 Turns out the car has evidently had an argument with a lamp post or telegraph pole, and found the hard way that they don't give. Rather than replacing the bent panels, the owner at the time evidently opted to cover up the problem :)
So now the car looks a bit reduced: 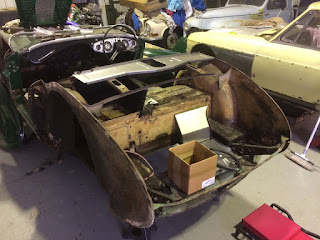 However, the good news is there is not much more Mark can take off the car :) And I think we can assume we've found most of the major rust pockets now.
So the car is now ready for the suspension points to be reinforced, and then most of the new panels to go in once the exhaust panel has been cut and finished.....

Hopefully Giles'll be back from his trip around the Bungle Bungles in time for the next post......