I will write more tomorrow but just wanted to get the photo link up.  End of day 4 and we are up to 2nd place overall !!   Woohoo.

But boy, do we get dusty without a roof on !! 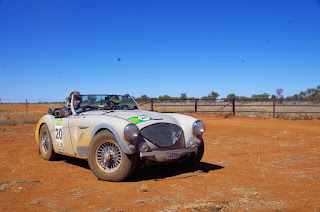 Come back for the story tomorrow.

Photos of the action :-  https://photos.app.goo.gl/B8zR7iQyuUgyZjSb8

After two days of "practice" where the results didn't really count (although the practice was helpful !), we have finally started the competitive stuff.  Suffice it to say that Gidget is performing extremely well, Ashton is driving well, and I am doing my best to keep up with both of them !!  Basically, all I can say is "SAND SAND SAND" !!!  It is everywhere, but in addition, it seems to just flow into the cockpit of the car.  It comes in from behind, and the faster you go, the faster the sand comes in !  As a result, we are just covered in red dust and sand from the moment we start !   In addition, if the driver (who shall be nameless) gets exuberant and puts the car sideways at all, then the sand also comes in over the sides of the car !  In fact, one the first day, the very first stage, on one corner we got so much sand in the car that my glasses clouded up, all the gauges and stop watch screens clouded up, and I got half an inch of sand  on my route book so I couldn't read it !   Such fun !!

After the first day, we were 6th.  On the second day it started to get more complicated.  Basically we are doing "Regularity", which means that if we have a 30 km long stage, and we have to do an overall average speed of 50 kmh, then we have to cross the finish line in exactly 36 minutes and 55 seconds.  Now on tarmac it is much easier because you can carry more corner speed, but on dirt, and often rough dirt, you just can't do that.  In addition, we have gates to open and close, or deep sandy river beds to cross, or cattle to avoid, or long bull dust sections, so keeping to an average isn't easy !  In addition, we are not allowed over 100 kmh, or under 30 kmh, so it is a fine balancing act.   So we have checks every km or so where I have worked out in advance what time it should take to reach there, and when we pass that point, I let Ashton know whether we are ahead or behind our targetted time.  And if you arrive early or late, you are penalised for every second either way !

Then they throw in curve balls where in a single stage they might break it down into 3 sections, and the first one you have to do at one average speed, the next at a different average speed, and the third at yet another speed !  Or just to really mess you up, they give you a section where you have to maintain a constant speed for a certain distance, and they have secret speed chacks hidden in order to make sure you are doing the set speed !

And in the meatime the driver is constantly wanting to know how long to go to the end, how long to the next marker, what corners or other terrain changes are coming up, etc etc.   So it is very busy in the passenger compartment during the stages, and sometimes we get it wrong, and sometimes we get it right.  On the longer stages it is also made more difficult because the dust is coating all the stop watches and mileage meters making them impossible to read, and my glasses start clouding over with the dust, so it is a constant cleaning process with a microfibre cloth in between time checks !  Busy, busy !

And then you see the guys in a Mercedes coupe or Peugeot, or another closed car, sitting in their airconditioned splendour, totally dust free, and usually with a latté beside them in their cup holder !   I wonder who is having more fun ????

The other people on the event are wonderful.  Like with any sport, everyone is here because they enjoy doing it, so it is very sociable, and that is a large part of the event.

On Monday we had a couple of very long and very rough stages.  In one very long rough section our left front wheel hit a rock or something, and Ashton immeditely knew he had damage because it felt very different - And the steering wheel was no longer "straight" !   It was quite a "bang", but we carried on, although on later inspection, we obviously had a lot more toe out than we had before !  Luckily there didn't seem to be too much other damage, and the tyre pressure sensors (whch have a digital read out on the dash) showed there were no tyre issues, so we continued.   However later inspection showed that it was actually the wheel spinner that had hit the rock as this was damaged, and the rock had then scored the lower sill of the car slightly, and pushed the exhaust cover onto the muffler, casing it to rattle a little.

So at the end of the day, we went to a local tyre place and had a front wheel aligment, which seemed to make everything OK again, as nothing seemed to be bent in the front.   Later on, during our rest day, we found that the left steering lever was a few mm closer to the wheel backing plate than the one on the right, so obviously this had bent slightly.  As this item is cast. if it had snapped we couldn't have welded it, so it would seem that this might be something we need to carry as a spare part.

Most people competing, agree that the kind of terrain we are encountering here is as bad or worse than what we will find in Mongolia, so it is reassuring that Gidget seems to be standing up to it all quite well.   Obviously in Mongolia the rough stuff just goes on for longer, but if we know roughly what to expect, we can deal with it.

We have had some cold mornings around 0 deg, with ice forming in puddles around the hotel swimming pool !   But my about 9 am the sun warms everything up, and it is usually a very pleasant 22 deg or so during the day - It really could not be nicer.

On Tuesday we did much better than previously, and got very close to our target times on each of the special stages.  This enabled us to claw our way up to 2nd overall which was pleasing. But with the dust continuing to be a problem, we are trying everything we can to try to find a solution.  Each day we have to vaccuum or use an airline to blow all the dust out, and then we are trying to seal every possible nook and cranny, either with gaffer tape or with silicone.  Basically the dust comes from behind, and it just fills the boot and the cabin from behind.  We feel that where the wings attach to the main shrounds needs to be sealed better, which can only be done later by removing  a lot of the panels, and also that the rubber seals around the boot need to be greatly improved.  Additionally, once we get the roll bar installed, maybe we can fix a shield behind our heads to prevent the wind carrying the dust forwards into the cabin ?  But we need to do something.........

Anyway, overall we are very happy with Gidget's performance.  The engine is strong and very torquey, the tyres seem to be working really well in the sand, and she handles really well and predictably in the dirt.  Now all we need to do is make sure we arrive at the end of all our special stages on time !!  We have 3 busy days ahead of us, and the last (very dusty) stage on Saturday is called "When the Fat Lady Sings", which should tell us something !