0023 In which Ashton pays a visit to Queensland

I started off this week exploring the wiring loom that is currently out of the car.  Electrics are not one of my favourite or strongest aspects of car ownership, but as with so many other aspects of this rebuild, I guess I am just going to have to learn !  While Ashton is keen to put in a new loom, my view is that the current one is OK, and is not original so could be only a few years old.  The problem is that a previous owner put in a new loom, and then used the original wiring for things like the last section to the headlights or tail light, and due to the poor condition of this original wiring, it makes it unusable in its present format.  My view is that if we replace just the old wiring, and then just add the wiring for the few extras we will need like power points, the system will work fine. And also move the fusebox into the cabin to remove it from heat and water.........We shall see.......Work in progress !

Apart from the big ERA books with lots of photos of previous P2P's, I have also been reading some stories of other people' 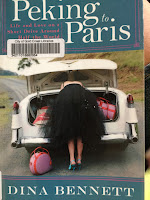 s adventures on the event.  One, titled "Peking to Paris - Life and love on a short drive around half the world", is written by Dina Bennett, an American who gets car sick after 20 miles, who accompanies her husband on the 2007 P2P, and is a very humerous account of how a totally "non car" lady survives on one of the world's most gruelling events.   Another great read is "The Great Peking to Paris Expedition", an account of not only the original 1907 event, but also of the 1997 re-creation when 5 original or replica cars repeated the event as closely as possible.   I am also reading a book called "The Road to Beijing" by David Brayshaw, who drove an Austin Healey 3000 from London to Beijing without any support, just because he wanted a break from "life".  Again a fascinating read, and one which proves that an Austin Healey can survive the journey.  All strongly recommended if you have even one adventurous bone in your body !!

I then picked up the refurbished original dampers from WW Shock Absorbers in Brisbane, where the had a cut-away rear damper which clearly shows the adjustment screw and pistons.  These dampers will be our spares, but until our remanufactured units arrive from Peter Caldwell in the US, these will be put on the car.  We heard from Peter this week and he has found some MGB front units which are slightly larger than the Healey ones, so he is going to supply us with those instead.  We therefore have to trim a bit of bodywork from the inner sill to enable these MGB units to fit.

I went shop-exploring again, this time looking at more cooling options, and also bonnet pins.  We plan to enable the bonnet to be propped open an inch or two at the back to allow engine heat to escape, and think that bonnet pins would be the best way of securing this safely.   It was then back to CCC where I took some radiator mounting photos before taking it over to Greg Ross at Red Devil Radiators so he could start work.  The core will still be copper / brass, but will be of more modern and efficient construction, which means the core can be thinner, thereby give a bit
more space (1.5 cm) between the fan and the radiator.  The design of the fan will give us another 1 cm or so, and then we can move the radiator slightly forward in its mounting to gain another cm of space, so I think we should be OK.  Greg also showed us a water oil cooler that fits inside the bottom tank of the radiator, thereby removing the possibility of a stone breaking an air oil cooler if mounted out front - A perfect solution.


Back at CCC, Steve helped me pull off the front hubs so I could clean them up and get the new ones ready to fit. A spacial tool was needed to remove the grease caps - Which someone had fitted incorrectly so they ripped apart and also destroyed the new tool, leaving Steve to beat on the remnants for some time before he was able to remove them !  The joys of taking an old car to pieces !  Anyway, with hubs off, I took them home for cleaning - And they needed it - They really were horrible with a build up of grease and dirt over the years - Probably as much from California as from Australia !

Ashton arrived on Thursday evening and we spent most of Friday morning running around to the windscreen, gearbox, and radiator workshops so Ashton could meet everyone and see what we were doing first hand. We eventually reached the CCC workshops at about lunch time, so we bought a pizza to
share, and started pulling more bits off the car.  On the Saturday morning, with fewer cars in the car park, we were able to pull Gidget's chassis
out into the sunshine and start work with heavy duty degreaser and a pressure washer, removing all the residual gunk and dirt on the chassis.  Some sections, like the front engine mount recesses, we so blocked up with packed dirt that they needed 15 minutes work just to clear them.  I reckon the car was 10 kg lighter by the time we finished !


We also found sections of blue paint on the front wings - Makes you wonder where that came from !  Original ?  Or perhaps parts off another car due to one of its previous "incidents" ?  It really would be fascinating to be able to see the complete factual history of this car - Or maybe that would be too frightening ?


Ashton left to return to Sydney on Saturday evening, after a very worthwhile couple of days.  He was able to meet most of the people working on his car, get a hands-on feel for where the reapirs are and where they are going, and it was a great support for me - I find it quite difficult having to make the many decisions every day when it is not my car.  So for Ashton to have more of a close up inspection made a big difference.


On the Sunday I set off to Brisbane for the British Car Day - An annual event with hundreds of quintessentially British cars as far as the eye could see.  I went over to the Austin section and found an A90, basically the source form the engine and many other parts on the Healey.  Looking underneath, there was the big cross member that required the big step cut out in the engine's sump,
which I have deduced will no longer be required on our car.  Great to finally have a true understanding of why that step was there !!  Then I spent time with Howard Lawrence poring over his beautiful Healey 100/4, and asking many questions and taking many photos.  Interesting he has a brake servo mounted in the engine bay, and says it makes a big difference to the drivability !  Might have to check on that later !!  A very interesting and informative time with Howard, and I also had time to chat with Noel Standfast of the Healey club about some of the windscreen issues we have.  And coincidentally, while I was off talking to Healey people, my Lotus Europa won 3rd place in the Lotus Club Concours that was held at the same time, so I even came home with a small trophy !

Then it was back home to start cleaning up some of the engine support brackets and the old brake back plates so I could build up the new ones that are sitting on my shelf.  I have dirt and grime from one end of the garage to another, and even some starting to make its was into the house - Whoops !
A final visit to CCC for the day found Andrew cutting off the original front damper mounts so he could fit the new and stronger adjustable Kilmartin units.

We continue to make progress, and it is all good progress, but it is never as fast as one would like.  Maybe we just need 30 hours in each day !!

Rest of the photos are here :-  https://photos.app.goo.gl/9HPN9FvKUBYkqiaI2