6th August 2017
A day off to look at complete Healeys for a change ! 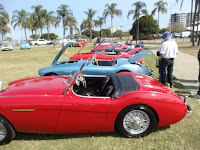 The Queensland Austin Healey Club held its annual Show and
Shine at Clontarf, up on the shores of Moreton Bay north of Brisbane on the 6th August, and despite it looking quite cloudy and overcast while we were driving up from the Gold Coast, once we arrived the sun came out and it was a beautiful warm sunny day.

It was good to see some Healeys that were all in one piece for a change !   I am so used to seeing Gidget in her current starte of déshabillé that it is quite a surprise to see so many cars not only all together, but also in superb condition.  A couple were absolute showstoppers - One of them I understand the owner had just completed a full concours rebuild about 12 months ago, and on the way home from an AH meet, he was rear-ended by a 4WD, seriously re-arranging the boot of his immaculate car.  Today the car was once more back in show condition, and I am sure he went home with another Healey running interference behind him for a change !!

One of my first tasks was to look at the brake drums of cars.  We
have new drums all round on Gidget, but they are currently plain steel, so we need to decise which colour to paint them because while they look great at present, if we leave them as they are, once they are on the car they will soon rust.  After sending some photos of silver, black, and body colour drums to Ashton, it was decided we would go with black. I will therefore buy some black heat proof paint and primer and paint ours.


Next I was looking at the insides of the cars, to see how and where everything was.  The first thing I learned was that an old rusty bit of tin that I had found tucked away in the boot of Gidget when she arrived in Queensland was in fact a parcel tray that fits up above the passengers legs under the dashboard !  Lucky I hadn't thown it away !! And when I checked with Ashton, he too had not realised what it was !


I then looked at how people had their spare wheels stowed in their boots, where people had located
their fire extinguishers, and then I suddenly noticed that each car had some aluminium trim on the B pillar door shut face, and along the sills.   We have some of that, but I was under the impression that it had merely been added to our car to cover up the bog and rust in the sills, whereas in fact it is a very important part of the original car !!  Once again, good job I hadn't thrown it out !!

Then I started looking in the engine bays of primarily the 100/4's, but also
other cars up to BJ8 3000 Mk III's, looking at where they had everything located.   First thing were the carburettor stabiliser bars that fit between the carbs and the inlet manifold to help stop them shaking too much - We definitely need some of those, and hopefully I will be able to make some up myself.  Then it was an inspection of the heat insulation people have - Not only between the carbs and the manifold, but also on the firewall to try
to keep some of the infamous "Healey Heat" off the driver and passenger.   Then it was studying air intakes into the cabin - We currently have nothing - no fresh air, no heater, nothing !  Some people have even installed blower fans into the hose, so obviously this is a major issue !

In addition, some people have radiator overflow bottles mounted to the side, others have washer bottles, and others have moved their coils away from the standard location on the engine where
they are subjected to heat and vibration, and mounted them on the chassis rails off to the side.   One person even had his coil mounted on top of the alternator - I am not sure if that is a very good idea ??

Overall, a very pleasant day, and I got lots of information not only from looking at the cars, but also from all the enthusiastic owners who of course were extremely knowledgeable about all things Healey.  We worth the day out and I came home with my head full of new ideas and (more !) things that need to be added to the list of things to do to our car !!   Hey ho !!